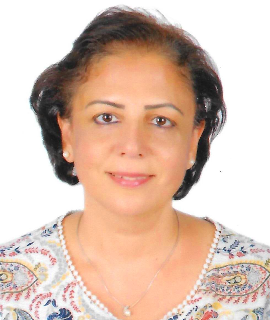 Dr. Sherine Adel Nasry was born in Cairo, Egypt, in 1966. She received her education in the German School (DSB) in Egypt, and is fluent in Arabic, English, and German languages with fair knowledge in French. In 1989 she received her B.Sc. in Oral and Dental Medicine as well as the MSc and Ph. D degrees in Oral Diagnosis, Oral Medicine and Periodontology from Faculty of Dentistry, Cairo University, Egypt, in 2004 and 2008, respectively. In 2014 she was also awarded a Diploma in the Management of Technology from Nile University.
In July 2004, she joined the National Research Centre, Cairo, Egypt as an Assistant Researcher. Was promoted to Researcher in 2009 and to Associate Professor in 2014, and is currently holding the position of Ass. Prof. in the Surgery and Oral Medicine department, Oral and Dental Research Division, NRC, Egypt.