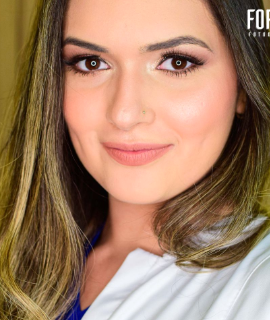 Introduction: The maxillary sinus can be affected by several recurrent sinus pathological processes, including sinusitis of odontogenic origin. This pathology is characterized by hyperplasia or inflammation in the lining mucosa of the sinus associated with a necrotic dental element. Since, when associated with painful symptoms and/or significant expansion, it should be surgically removed. Thus, the Caldwell-Luc technique has been suggested as a means of access to the maxillary sinus, because it allows its inspection and the treatment of diseases that affect it. This technique has been used for the treatment of irreversible chronic maxillary sinusitis, removal of dental roots and foreign bodies.
Objective: The present study aims to report a clinical case of a patient with maxillary sinusitis of odontogenic origin, accompanied by a somewhat painful symptomatology where she had as surgical treatment of choice a maxillary sinusectomy using the Caldwell-Luc technique. Case report: Female patient, 57 years old sought the Ambulatory of Maxillofacial Surgery and Traumatology Service at the Federal University of Pernambuco, complaining about the absence of dental elements, in which he reported that he lost at a young age due to infectious and inflammatory processes. He had constant headaches and the presence of purulent secretion leaving through the nasal region and constant pain in the middle third of the face. Panoramic radiography imaging showed the absence of multiple dental elements with two teeth included: one in the anterior region of the right maxilla and the other in the posterior region of the left mandible, with radiolucent images involving their crowns, with the diagnostic hypotheses of dentigerous cysts. There was a slightly radiopaque, homogeneous, dome-shaped alteration located on the floor of the left maxillary sinus. The patient's treatment was based on left maxillary sinusectomy of odontogenic origin and excisions of the right upper canine and left lower third molar, both included. The surgery was performed under general anesthesia for enucleation of the cyst in the maxillary sinus by the Caldwell-Luc surgical technique. The sample was referred for histopathological analysis at the Oral Pathology laboratory of the Hospital das Clínicas of the Federal University of Pernambuco, which confirmed the initial diagnosis. The patient responded well to the postoperative period with remission of painful symptoms and good healing.
Conclusion: It is concluded, therefore, that maxillary sinusitis of odontogenic origin will have its clinical treatment of choice: the cystic enucleation of the entire lesion through the Caldwell-Luc surgical technique. This diagnosis will be confirmed by combining the clinical examination for a detailed anamnesis, complementary tests and imaging tests.

Dental School academic in UNIFACEX, BR; Currently, an intern at Ambulatory of Maxillofacial Surgery and Traumatology Service at the Federal University of Pernambuco. As a member of the project to care of patients with oral diseases and facial traumas, project entitled prevention and treatment of cancer in face and mouth areas in Venturosa-Pernambuco-Brazil, and Use of Traditional Chinese Medicine in the treatment of patients with temporomandibular disorders.