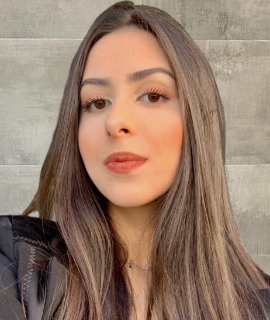 The dentigerous cyst is the most common developmental odontogenic cysts involved in this classification. It believes that originates at the separation of the fluid that is around the crown of an impacted tooth. This cyst is characterized for envolving the crown of na impacted tooth and connects to the tooth in the cementoenamel junction. This cyst most often affects the mandibulars third molars. The most affected age group is from ten to thirty years old, with a slight preference for the male sex and higher prevalence of caucasians. The dentigerous cysts are generally small size and asymptomatic, but may in some cases reach a considerable size. Radiographically, there is an unilocular radiolucent image associated with the crown of an impacted tooth, with well-defined and often sclerotic margins. This work is a case report of dentigerous cyst associated with molars enclosed in a female patient of 20 years old. The patient searched treatment to the Ambulatory of Maxillofacial Surgery and Traumatology Service at the Federal University of Pernambuco- Brazil, after radiographic examination for orthodontic treatment. She did not complain of pain or bleeding, only a small increase in volume on the left side of the face. At radiographic evaluation, it was noticed the presence of radiolucence area suggestive of cyst at left maxilar second and third molar and right mandibular third molar, all enclosed. The surgical treatment performed was cystic enucleation. The diagnosis of dentigerous cyst was confirmed after histopathological examination. In this report we will discuss the clinical, radiographical, pathological and therapeutical case.

Student of the 7th period of Dentistry at the University Federal de Pernambuco - UFPE. Intern at the Oral Maxillofacial Surgery and Traumatology of the Hospital das Clinicas, Federal University of Pernambuco - UFPE. She is currently a volunteer in the extension entitled: Care of patients with oral diseases and facial trauma and the project entitled Prevention and treatment of cancer in the face and mouth regions in the city of Venturosa/PE. She also participates as a volunteer in the project for the use of Traditional Chinese Medicine in the treatment of patients with temporomandibular joint dysfunctions.